Generating set refers to the power generation equipment that can convert mechanical energy or other renewable energy into electrical energy. In general, our common generating set is usually driven by internal combustion engine (gasoline engine, diesel engine and other engines). In recent years, the renewable new energy includes nuclear energy, wind energy, solar energy, biomass energy, marine energy and other new generation units. Due to the large capacity of diesel generator set, it can be operated in parallel and has a long time of continuous power supply. It can also operate independently without parallel operation with regional power grid, and is not affected by power grid failure, so it has high reliability. Especially for some areas where the commonly used power supply is not very reliable, using diesel generator set as standby power supply can not only play the role of emergency power supply, but also can use some important loads in power outage through reasonable optimization of low-voltage system, so it is widely used in engineering, hospitals, factories and other fields. The basic principles and structural forms of common generating units are introduced as follows:

Generator set matched with steam turbine. In order to obtain higher efficiency, steam turbines are generally made of high speed, usually at 3000 rpm (frequency of 50 Hz) or 3600 RPM (frequency of 60 Hz). The speed of steam turbine in nuclear power plant is low, but it is above 1500 rpm. In order to reduce the mechanical stress caused by centrifugal force and reduce the wind friction loss, the rotor diameter is generally smaller and the length is larger, that is to say, the slender rotor is used. Especially for large capacity high-speed units above 3000 rpm, due to the material strength, the rotor diameter is strictly limited, generally can not exceed 1.2m. The length of the rotor body is limited by the critical speed. When the body length is more than 6 times of the diameter, the second critical speed of the rotor will be close to the running speed of the motor, and large vibration may occur during operation. Therefore, the rotor size of large high-speed turbo generator is strictly limited. The rotor size of air-cooled motor of about 100000 kW has reached the limit size mentioned above. In order to increase the motor capacity, only by increasing the electromagnetic load of the motor. Therefore, the cooling of motor must be strengthened. Therefore, the hydrogen cooling or water cooling technology with better cooling effect is adopted for the steam turbine generator units with more than 50-100 MW. Since the 1970s, the maximum capacity of steam turbine generator units has reached 1.3-1.5 million kilowatts. Since 1986, great breakthroughs have been made in the research of high critical temperature superconductors. Superconducting technology is expected to be applied in turbogenerator, which will produce a new leap in the history of turbogenerator. 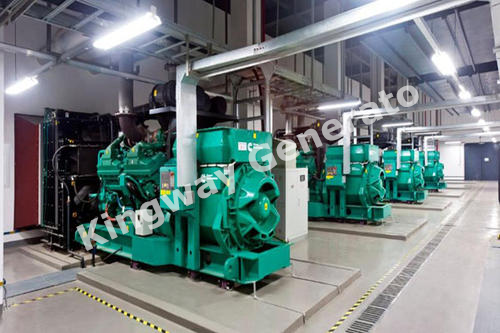 A generator set driven by a hydraulic turbine. Due to the different natural conditions of hydropower stations, the capacity and speed of hydro generating units vary greatly. In general, the horizontal structure is usually used for small hydro generators and high-speed hydro generators driven by Pelton turbines, while vertical structures are mostly used for large and medium-sized speed generators. Since most hydropower stations are far away from the city, they usually need to pass through a long transmission line to supply power to the load. Therefore, the power system puts forward higher requirements for the operation stability of Hydrogenerator: the motor parameters need to be carefully selected; the rotor moment of inertia is required to be larger. Therefore, the shape of hydro generator is different from that of turbo generator, its rotor diameter is large and its length is short. In addition to general power generation, it is especially suitable for peak load regulation unit and emergency standby unit. The maximum capacity of hydro generating units has reached 700000 kW. 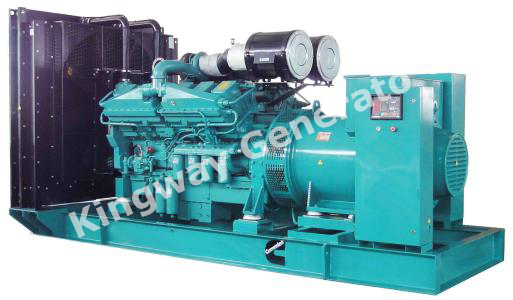 The diesel engine drives the generator and converts the energy of diesel into electric energy. In the cylinder of diesel engine, the clean air filtered by the air filter is fully mixed with the high-pressure atomized diesel from the fuel injection nozzle. Under the upward extrusion of the piston, the volume is reduced and the temperature rises rapidly, reaching the ignition point of diesel oil. When the diesel oil is ignited, the mixed gas burns violently, and the volume expands rapidly, pushing the piston downward, which is called "work". Each cylinder works in a certain order, and the thrust acting on the piston turns into a force to push the crankshaft to rotate through the connecting rod, thus driving the crankshaft to rotate. If the brushless synchronous alternator is installed in the same axis with the crankshaft of the diesel engine, the rotation of the diesel engine can be used to drive the rotor of the generator. Using the "electromagnetic induction" principle, the generator will output the induced electromotive force, and the current can be generated through the closed load circuit. Only the basic working principle of the generator set is described here. In order to obtain usable and stable power output, a series of diesel engine and generator control and protection devices and circuits are needed.